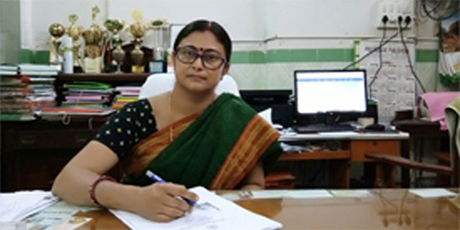 It gives me immense pleasure to write on the Krishnath College website as the first lady Principal. Our college is one of the oldest and leading colleges of West Bengal, with a great heritage of 162 years. The college was established in 1853 – the objective conditions were ready for foundation of a college at Berhampore, Murshidabad for imparting western education. Raja Krishnath Roy of Cossimbazar, with whose name our college has been associated was an outstanding personality. In 1841, when he was a young man of 19 and had just received his zamindary, entertained a grand idea and dream of founding a college. In his first will (January 7, 1841) he expressed his desire to found “extensive and handsome college or house of learning”. Before his tragic death he expressed his idea of expanding this college to a university. After the death of Maharaja Krishnath Roy, Maharani Swarnamoyee provided evidence of her love for education by making gift of land and money for salvaging the college from financial crises. I salute Maharani Swarnamoyee for her immense love for education.

We also respectfully remember the names of great persons who were associated with this college like the martyrs Masterda Surya Sen and Nalini Bagchi, the great educationist, philosopher and former Principal of this college Acharya Brajendranath Seal, E M Wheeler, Radhakamal Mukherjee, Dr Ram Chandra Pal etc. In 1984, Prof. Bhabatosh Dutta in his report of the Commission for Planning of Higher Education in West Bengal, constituted by the Government of West Bengal, wrote that his college “deserves special attention”, and recommended its recognition as an autonomous college and suggested it as an ideal location for a University. In the 150 Years Commemoration Volume (1853-2003) of this college a former President of the Governing Body expressed his idea thus – “we do hope and sincerely believe that the Government of West Bengal who have so long been patronizing this college will come forward to fulfill this cherished dream”. We are continuing to cherish the dream.

Krishnath College had established a tradition of great cultural achievement. It was able, therefore, to attract students from all parts of West Bengal and other states also. The sincere atmosphere of the college and the ideal behavior of its teachers inculcated in the minds of the students the ideas of sweetness of temper, sanity of outlook, strength of spirit and sense of responsibility which are the features of a cultured mind. Now socio-economic factors have brought about a crisis in the field of higher education. Students are suffering from a sense of frustration; they have to get rid of these problems and fight valiantly against the destructive spirits. They have to make significant contributions to the culture and civilization of the world. The educated and intelligent people of Mother India must muster the courage to fight against the evil tendencies for the destruction of Indian society. Each one of us – teachers as well as the taught – have to take a vow to obey the following dictates of the Taittiriya Upanishad – “Don’t swerve from the truth. Do not swerve from duty. Do not neglect what is useful. Do not miss opportunities to become great. Do not neglect the duties of learning and teaching.”