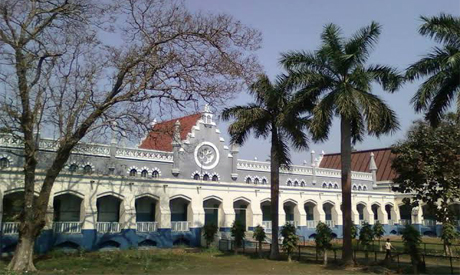 Situated on the eastern bank of the river Bhagirathi, the 150 yrs old Krishnath college which has gathered to itself a halo bequeathed by its eminent teachers and alumuni, was originally founded by the Govt. of Bengal under East India Company on the 18th Nov. 1853 by notification no : 1913 20th Oct 1953, with the assistance of Nawab, Zaminders and a number of common people of this district although the idea of founding both the college and the University was first conceived by the visionary idealist and a Renaissance man Raja Krishnath – a dream that was not translated into reality by his cruel untimely death. However, since then the growth and development of this college have always been intimately concerned with Cossimbazar Raj family. Thus it is significant that the genesis of this Institution marked a cultural synthesis between feudalism and democracy not often dreamed of in that remote past.

Mr. Harrison was the first principal of this college. On 29th July, 1863 Sir Cecil Beadon, the then lieutenant Governor of Bengal laid the foundation of the present college building a wonderful specimen of Saracenic – Gothic Architecture style. In 1865 Berhampore college attained the full status of a college with B.A and law classes. In the year 1897 the British Government handed over the college to the Honourable Maharaja Manindra Chandra Nandi and in 1903 as recorded in the Calcutta University calendar this Institute was re christened as Krishnath College. In 1856 the college came under the Govt. sponsored scheme in accordance with the U.G.C regulation, Govt. of India.

Since 1853 this college fit to be declared a heritage institution has been unswervingly engaged in promoting and fostering education among the people of four districts such as Murshidabad, Nadia, Malda and Birbhum. Since the mid 19th century it was one of the main seats of Renaissance Bengal, centering this Institution Berhampore town was then turned into a nursery of Bengal Literature because the College established a creative contact with literary luminaries of 19th century Bengali like Bankim Chandra Chatterjee. Dinabandhu Mitra, Ramesh Chandra Mazumdar, Bhudeb Mukherjee and others who were all then at Berhampore for their individual occasion.

It is highly gratifying to note here that this college first started Commerce Education (B.Com) in this district in keeping with the spirit of times in the decade of sixties. In post Independence period when India was developing fast in the fields of Commerce and industry it is natural that this century old college would again play the role of a path-finder in this district.

In 1968 morning section of the college was opened to cope with the mounting pressure of students and in 1978 the H.S. course (10+2) was introduced owing to the pressure of the local public and the repeated request of the State Govt. In 1994 in accordance with the programme of both Central and State Government, The college started imparting Vocational Education Tourism, Sericulture, Office Management and Secretarial practice and in 1998 Netaji Open University started also functioning to illuminate the minds of socially and educationally backward and dropped student. In its long journey towards advancement of learning the introduction of these series of course of studies from time to time in compliance with the national demand is in quite fitness of things of this college because still a it holds aloft the flag of being the premier Institution for higher education in all respects in this district.

With its long span of life extending over almost 150 years the college had nurtured some illustrious scholars who had made notable contributions to the intellectual awakening of Bengal as well as India. The eminent orientalist scholar Ram Das Sen, Rakhal Das Banerjee, distinguished archeologist famous for his discovery of the site of Mahenjodaro in Sind, the brothers Radha Kumud Mukherjee and Radha Kamal Mukherjee, erudite professor, made significant contribution in Indian history and Indian economics. Ramgoti Nayratna a pioneer in the Historical study of Bengali literature. Brojendra Nath Seal, the great Philosopher and one of the greatest intellectuals of present day India Sir Gurudas Banerjee the famous Jurist savant, the Nationalist leader and eminent Jurist Sir Rashbehari Ghosh, the renowned International Historian K.K.Dutta, the notable political philosopher Bimanbehari Mazumdar, the Bengali poet Kalidas Roy – these are some illustrious names among others who were associated with this college in different capacities. Surely India is proud of this premier institution.

The college with three thousand students approximately (both day and Morning section) on its roll provides for both Pass and Hons. Teaching in almost all major subjects in Science and Humanities and Vocational disciplines including 21s’ century jewel on the crown Computer Application.

The college library containing roughly 45,000 titles of varied interests is an object of both glory and pride of Bengal. Its ancient collection provokes attraction and envy in many minds.

The college extends its accommodation of about 450 students coming outside Berhampore in its ihree spacious large hostels (two for boys and two for girls).

Maintenance of tradition, dissemination of knowledge, expansion of discipline in the face of changing circumstances, shifting values and depressing economic condition are extremely difficult and trying. An institution must grow and expand, it cannot remain static, for stagnation is death. But sadly growth is out of question in a college whose annual budget shows a recurrent deficit. Changing spirit of times demands extra financial aid This age old living mother has never faced in her long life such a critical problem as now – on the one hand she needs to feed myriad hungry children howling for cultures – sweetness and light of soul, on the other hand she suffers from terrible paucity of funds to meet the huge need. It is always a grim tragedy when starving children and almost a pauper mother meet together.